Greenbelters, I do love our own lake but for a change of pace I drive to beautiful, sunny Lake Artemesia, just 2 miles down Greenbelt Road. Blooming in this recent shot are white Hibiscus and purplish Joe Pye Weed.

Catmint is blooming like crazy in the island beds around these two lovely benches. I’m betting it doesn’t get supplemental watering there, so that tells us it’s plenty drought-tolerant. 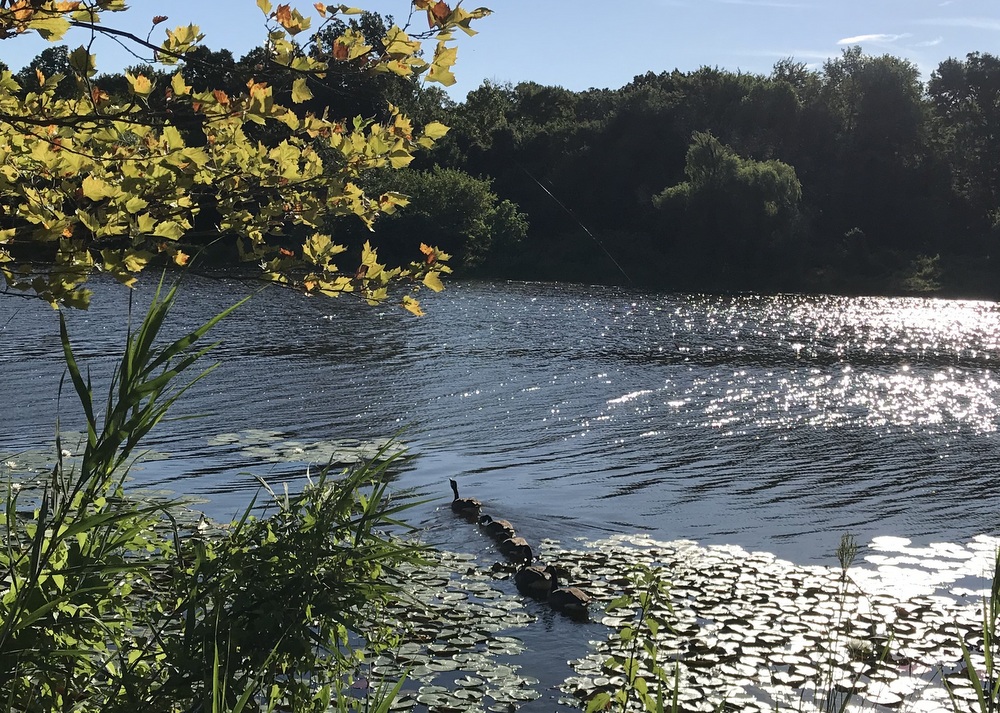 Ah, the ducklings! They grow up so fast.

With those mellow images in mind, here’s an uhhappy change – the trees planted on Earth Day of this year, during an event I praised in this post from April 24, now mostly dead, as far as I could see. Newly planted anything needs regular watering during the whole first season but especially during the late spring-early summer drought we had after these poor things were planted.

So how does this happen? Was there a plan to keep these trees alive in their first season? The event organizers were the City of College Park, the Maryland-National Capital Park and Planning Commission, Fraternity Phi Kappa Psi and the College Park’Rotary Club.

Lord knows it’s awful to see trash thrown anywhere but in a lake? It boggles the mind. I didn’t see many examples of the stuff, so I’ll assume they’re removed regularly. Thank you, trash-removers!

Finally, another type of waste on the small pier near the bathrooms – the goose droppings.  I wonder if the stuff is carried off rather than thrown into the lake, to prevent overfertilization and the harms it can cause.

Greenbelt Biota, a Facebook group of 397 members as of July 2020, calls itself Greenbelt’s...

As a regular outdoor walker for exercise and the sheer pleasure of being outdoors, I’d...

Good news! Greenbelt has its own field guide now: “A Hundred Wild Things – a...

Remember the wedding of Hillary Gottemoeller and Joe Harris in Roosevelt Center back in 2015?...

by Jeff Lemieux Do you remember decades ago when Takoma Park, Md. declared itself...

Lake Artemesia was a popular place to enjoy a glorious Earth Day this year,...

Another great “Greenbelt Minute” from videographer Andy Zmidzinski. In this one he follows CHEARS volunteers...