Since moving to Greenbelt I’d become interested in Radburn, the New Jersey development that was America’s first garden city and the predecessor to Greenbelt. So I visited Radburn this past October, and had the good fortune to be connected with the very best tour guides there, thanks to Greenbelt scholar Professor Isabelle Gournay. She connected me with architects and long-time residents Larry and Felice Kopnik, who generously devoted hours showing me their home, community, and then telling the insider’s story. Radburn was constructed in 1928, almost a decade before Greenbelt.

First, Greenbelt and Radburn are similar in embodying Clarence Stein and Henry Wright’s “garden city” concept, creating superblocks, and separating pedestrians from cars through the use of a unique reverse back-front design with formal sides facing inner sidewalks, not the street.

Their main dissimilarity is that the town of Radburn was never built. It’s just 900 units of housing, a mix of detached and attached, plus one common building – the Radburn Center (photo below). Two-thirds of hte original plan was never built because of funding dryijg up during the Depression.

So Radburn is simply a residential development within the town of Fairview, with commercial buildings that were built later and in a very different style.

Left, the original plan. The only parts actually built are shown in green. Notice the similar superblock pattern to Greenbelt’s.

Left, Radburn Center, built in 1924, was part of the original Stein plan but Radburn’s commercial area was not.

Experts, please help me identify the styles of architecture I found in Radburn’s homes – I just know they’re nothing like Greenbelt’s homes. One reviewer I found described the houses as “somewhat mock-Tudor, mock-New England, mock anything respectable”(Bailey 1). 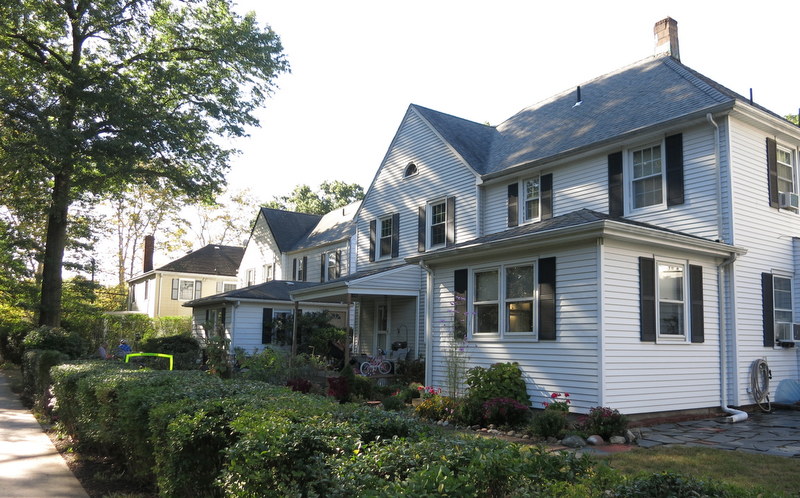 Radburn homes are quite intact, as the only additions allowed by zoning are ones that simply enclose the original back porch. No expansion of the homes’ original footprint is allowed.

Gardensides look onto large open, grassy parks. Above and below.

I saw two gazebos like this one that I’m told are considered iconic features of Radburn.

The townhouse service sides face cul de sacs like this one, rather than through streets and parking lots that we have here.

This was a familiar sight.

But Radburn’s underpasses have murals.

Where internal sidewalks run between rows of homes, the vegetation is overgrown and looming in places, just like Greenbelt’s.

Reviews of the Radburn Experiment

I learned in my research that of the three federal greenbelt towns, ours is the only one that followed the radical front-back reversal used in Radburn. Planners for Greenhills and Greendale reverted to the usual alignment of front entrances facing streets. So I wondered why.

One reason was obvious to me on my visit – now that residents’ lives are oriented to cars and streets, visitors approach the home from the much less attractive side, which in many cases is at the garage and basement level.

*Architect Alden Christie, who grew up in Radburn, explains that:

“Houses are turned around with living and sleeping rooms facing gardens and parks.”  “The decision to place front doors on the greensward and back doors next to garages on the cul de sacs proved a mistake, with the doors facing the cul de sacs taking on both formal and service functions, a flaw recognized as early as 1937 by landscape architect Elbert Peets.”

He continues, “Entrance to the house was unclear, because of its orientation, and despite Wright and Stein’s best efforts, the door from the driveway — the entrance to the kitchen — became the main entrance.”

Also, “Many people felt a distinct lack of privacy while living at Radburn.”

*Another critic wrote that the “daring Radburn idea” didn’t foster the social goals of the developers, saying the “misplaced dream” of controlling the auto and having residents share open spaces is today seen as an “earnest and naive experiment.”

Reviewers praise the strong sense of community created by the Radburn plan, and the low pedestrian death rates in the town.

Home ownership in Radburn is fee simple, not co-op or condo, but there IS a homeowners association – the Radburn Association, which provides a large part of the recreation available to residents. In addition to the heated swimming pools, that includes camps, daycare, and many other activities for residents of all ages.

But the governance of the association is so undemocratic, it’s positively shocking!  According to Wiki and confirmed in my conversations with Larry and Felice Kopnik, board members choose their successors. There’s no financial disclosure of the association’s finances, despite residents asking for it. And only recently, thanks to a lawsuit, have all residents even been allowed to BE members of the association!

There’s so much legal challenge to the association’s authority that it spends roughly $300,000 per year on legal fees – that’s 1/3 of its total budget – and has paid the same legal firm similarly large amounts for 40 whole years.

The Radburn Association has 900 residential units..

Coming Talk by the Greenbelt Museum?

I told Megan and Sheila at the Greenbelt Museum about Radburn and what a great guide the very knowledgeable Kopniks had been for my visit and I have good news – the Museum is inviting the Kopniks to come talk to Greenbelters! Larry has a  presentation ready to go already with photos that are sure to be MUCH better than the ones in this post.

*From Paradise Planned: The Garden Suburb and the Modern City by Stern, Fishman and Tilove 2013.

I’ve been enjoying making videos lately, especially since the pandemic made in-person garden-touring impossible for...

(Originally published in the Greenbelt News Review.) Enjoy spring and fellow Greenbelters in the spacious...

The goal is super-low-maintenance I’m sure you all recognize this 21 by 11-foot island bed...

The final video garden tour of the season walks the viewer through the plant-packed garden...

Through the pandemic, I’ve been having a lot of fun making “virtual garden tours,” using...

I’m happy to finally have a Virtual Greenbelt Garden Tour outside of Old Greenbelt, thanks...